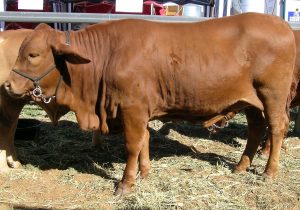 Droughtmaster Cattle, developed specifically for Northern Australia’s arid climate, have proved to be a miraculous advancement, adapting to poor conditions in countries worldwide! These cattle truly live up to their optimistic name. 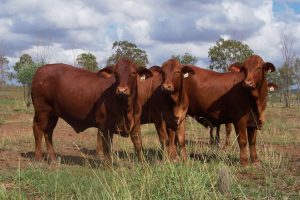 Although they are available in polled and horned varieties, most are polled, especially the studs. Droughtmaster Cattle have a unique phenotype, which allows them to survive the heat. Their humps are moderate and their flesh, though loose, fits well. There are a large number of sweat glands in the loose skin, allowing Droughtmaster Cattle to better thermoregulate.

This structure is parasite repellent as well, due to chemicals released in the sweat. Their eyes are hooded, allowing immunity to injury, flies and sun disorders! A slow metabolism helps Droughtmaster Cattle to stay cool as well, and they can digest food other cattle cannot! Droughtmaster are not bloat prone due to their small first stomach and ability to absorb nitrogen. They have good immune responses to internal and external parasites.

On poor graze, Droughtmaster Cattle produce remarkably good muscling. Their carcass yields are high and the quality lean meat is tender. Droughtmaster Cattle are moderately late in maturing for slaughter, and are usually taken at one to two years of age. Originating in Australia, Droughtmaster Cattle were conceptualized when cattle ticks imported to Australia in 1896 began ravaging local herds and European breeds, which did not particularly flourish in arid regions anyway.

After various crosses, breeders were extremely pleased with the end product of the Droughtmaster, who is almost exactly half Shorthorn and half Brahman! The cattle became extremely popular and are now the second largest breed in Northern Australia. In the 1970’s, Droughtmaster Cattle were exported globally and met with accolades.

Recently, they have been exported to tropical and semi-arid underdeveloped countries like Western Samoa, due to their low-input, low-maintenance, high-yield beef production abilities. Droughtmaster Cattle need little care. They can finish off fields that other cattle could not digest and are not susceptible to bloat. Easy to handle, they are aggressive grazers and need little water.

Droughtmaster Cattle are not susceptible to sunburns, pinkeye, blight, cancer eye, internal or external parasites, heat stroke, foot problems, predation or dehydration! Droughtmaster Cattle reach sexual maturity early and most heifers are bred around 14 months of age. They have easy calvings and rarely need assistance. Droughtmaster Cattle will continue to reproduce even under harsh or adverse conditions. Pregnant cattle retain the ability to walk long distances to food or water and yet birth healthy calves.

Droughtmaster bulls have high libidos and produce calves with low birth weights, making them good for crossbreeding with fast-gaining breeds. Maternal instincts in Droughtmaster cows are strong, and they make attentive mothers who will defend their calves from predators. They produce plenty of milk and the fast growing calves have high weaning weights!