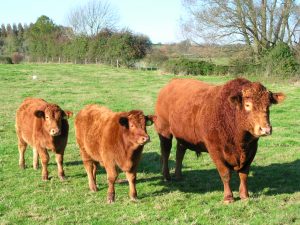 Though its origins are obscured, there is no doubt that the Devon or North Devon breed of cattle is a valuable asset to any ranch. These cattle, sometimes called Red Rubies because of their color, are well loved for their docile natures and efficient grazing. Devon Cattle are efficient grazers and will do well on even sparse land.

They are hardy and adaptable to most management systems, from stabling to pasturing. Despite being well adapted to cold, rainy climates, Devon Cattle can also thrive in hot or tropical climates! These cattle also have a reputation for being sweet, docile, and easy to handle. Mature Devon bulls grow to about 2,000 pounds, and cows are about 1,100 pounds at maturity.

All Devon Cattle are a bright, rich red color and their hair is quite thick. In colder climates they develop long, curly hair, but in warm weather it tends to be short and smooth. With a fine bone structure, Devon Cattle have a stocky appearance because of their thick muscling. This gives them a high carcass yield when they are used as beef cattle. 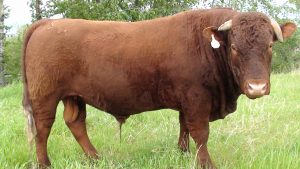 Naturally weather proof, Devon Cattle are able to retain their fertility and high, healthy sperm counts even in the hottest weather. Devon Cattle have very uncertain origins. All anyone really knows is that their red predecessors occupied southern England as early as 55 B.C., when the Romans noted their presence.

It is thought that these cattle traveled to England from Asia via Europe. Another theory states that Phoenicians may have brought them by sea in exchange for tin. Either theory would account for the Devon’s high heat resistance. The Devon herd book was begun in 1850, and in 1884, the Devon Cattle Breeder’s Association was founded. Although many breeders were highly significant in Devon Cattle’s development, Francis Quartly and his family in the early 1800’s are perhaps the most notable. 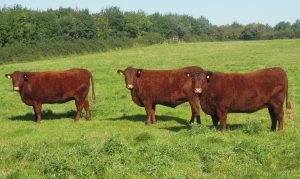 Although Devon Cattle were typically raised as dual-purpose animals, today an emphasis is placed on their superior qualities as beef cattle. In most areas, Devon Cattle are now used exclusively as beef cattle, but in the United States they are retained as dairy cows through the American Milking Devon Cattle Association. This breed is not the same as the South Devon. Recently trends in large calf birth weights have been associated with difficult Devon births.

Because of their superior grass finishing abilities and natural vigor, Devon Cattle are popular as improving cross breeders. Although typically Devon Cattle have not had difficult birthings, as of late, calving has become more difficult with the trend toward larger calves. Usually a Devon male calf weighs 75 pounds, though they range from 55 to 95 pounds. Female calves range from 45 to 90 pounds, though their birthweight is typically about 70 pounds.