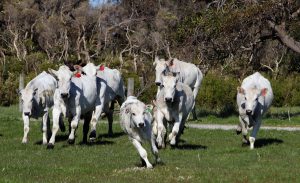 As the largest breed of cattle in the world, the Chianina is kept in very few countries! A Chianina bull, Donnetto, actually set the world record for cattle weight! Because they were originally used as draft animals, Chianina Cattle are remarkably easy to handle and very docile.

This is essential due to their large size! Today, Chianina Cattle are used more as a “Terminal” breed than a beef breed: this means they are used primarily as studs in crossbreeding. Chianina are very large, standing about 170 centimeters at the shoulder with females being about ten centimeters shorter. Bulls weigh from 1200 to 1500 pounds, and females from 800 to 1000 pounds.

They have short, porcelain white hair, which may have hints of gray. The skin in Chianina Cattle is darkly pigmented black. Generally, bulls have more grayish front ends, and all areas where there is little hair are darker as well because of the colored skin. The muzzle, horns, and hooves are all dark also, and the eyelashes and tail switch are black in color! 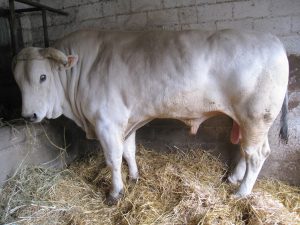 These cattle have long faces. The shoulders, hindquarters, and back are all exceptionally well muscled in Chianina Cattle. Their legs are also long, especially compared to their body length. Apart from functioning as draft animals in the past and as a terminal breed today, Chianina are also raised for their beef. The meat is of good quality, and the cattle have a high carcass yield with little fat.

Chianina are truly an ancient breed. They bear resemblance to cattle painted in prehistoric caves! It is thought that perhaps they are actually thousands of years old. The ancestors of Chianina Cattle came from Umbria in Northern Italy, but the modern breed type was developed in the Tuscan Chianina Valley. In 1932, the state commissioned breeding programs, and use as draft animals stopped in favor of beef production. 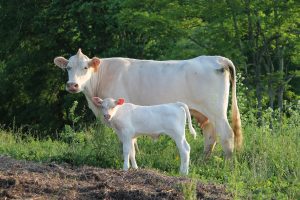 Due to the fear of Foot and Mouth Disease, the first Chianina Cow in Italy actually came in the form of semen from a quarantined Italian bull in 1971! The result was a half-breed Chianina born in 1972. Finally, in 1973, a full-blooded Chianina was imported to the United States from Canada. Today, they remain valued as cross breeders and beef cattle. Chianina Cattle have remarkably small udders and are not good milk producers.

They do very well in hot climates and have a naturally high resistance to most diseases. The breed has been divided into four strains, which differ slightly in size and weight. Chianina calves are born a golden reddish color. They become lighter with maturity and begin acquiring their white shading at two months of age. Their horns are also very dark, and as they mature, become lighter from the base up.