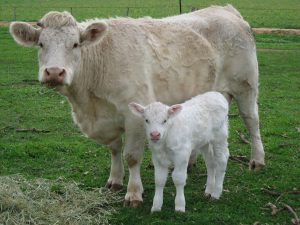 Having once been used as a draft animal, they are fairly easy to handle and docile, which is essential because of their large size! Charolais are hardy animals and aggressive grazers. They are able to travel reasonable distances and are adaptable to most management systems.

Also, Charolais Cattle can withstand difficult weather and moderate cold! With mature bulls often reaching 2,000 to 2,500 pounds and cows weighing in from 1,250 to 2,000 pounds, Charolais Cattle are obviously large! They have large frames as well, and long bodies, and often appear coarse or rugged. Charolais originally had horns and most still do, but it is common to encounter herds which have been “bred up” to a polled phenotype.

Generally, Charolais have darkly pigmented skin covered in short, white or cream colored hair. In the winter or in colder climates, Charolais Cattle will grow thicker, longer hair! Although Charolais are used primarily as beef cattle, their milk output is considerable. Centuries of selective breeding for bone structure and muscling have resulted in animals with high carcass yields and little fat. 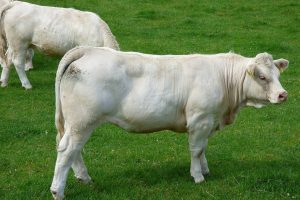 Charolais meat is highly praised for both its texture and flavor. Charolais Cattle originated in the eastern part of France, the Jura Mountains. From here they spread to the district of Charolles, hence their name, and began to be more refined. It is uncertain exactly when the Charolais arrived in Charolles, but literary references as far back as 878 make note of the white cattle of this region.

In the 16th and 17th centuries, Charolais became popular in nearby metropolises like Lyon. Finally in 1773, Claude Matthieu moved his herd of Charolais to the region of Nievres where truly distinctive breeding began. For a time, Charolais Cattle were known as Nievemais for this reason! In 1864, a herd book was set up in this region, and back in Charolles a separate book was founded in 1882.

In 1919, the registries merged. In 1930, 1931, and 1937, Jean Pugibet, who had discovered the Charolais breed in France during his war time service, imported a small herd to Mexico. In 1936, the Texan King Ranch in the United States purchased some Charolais from Pugibet, as did various other private breeders. With an outbreak of Foot and Mouth Disease, all imports stopped but the Charolais population was small enough where inbreeding was a danger.

Therefore, they were often crossed with other cattle, and the purity of the breed was tainted. Today, American registries require animals to be at least 31/32 parts Charolais to be considered purebred. Animals may be bred up to the standard. In 1965, Canada relaxed its quarantine standards a bit and pure French Charolais cattle were once more imported, improving the quality of American Charolais herds! Today, the Charolais remains popular, especially in Ireland, South Africa, and South America, and is France’s number one beef breed! 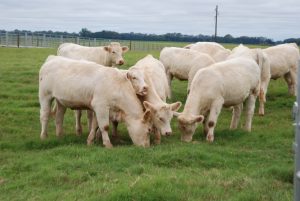 Charolais Cattle are often used to cross breed with other cattle, introducing general hardiness and muscle into other herds. Charolais Cattle are good milk producers and are known for producing vigorous, healthy calves that gain weight quickly. It is not recommended that Charolais bulls be crossed with heifers that have a history of difficult calving. If a heifer can handle a Charolais bull’s calf, the progeny will be worth more than most other beef breeds by about 18 percent!