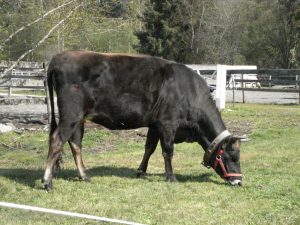 An extremely rare breed, the Canadienne breed of cattle is well known in Quebec! These sweet, docile cows are very well suited to Canada’s cold climate, and it is fortunate that breeders had the foresight to save the breed from extinction!

Generally, these cattle do not weigh more than 1100 pounds. Their short, dark hair is usually black or brown, and the chest, belly, muzzle, udder, scrotum, and sides may be a little lighter than the rest of the body. Canadienne also have very darkly pigmented skin and dark hooves. Their horns are quite short and their straight faces are refined, tidy and appealing!

Generally, Canadienne produce meat that is lean and their light bone structure results in a high carcass yield. Their milk production is also extremely high compared to their body size! During the 17th century, the Canadienne was developed in Canada from choice dairy cattle imported from Brittany and Normandy in France.

The cattle selected from this stock were chosen for their hardiness in the cold climate, their longevity, and their milk production. The Canadienne were not very popular, and in the mid 1800’s many dairy farmers tried to cross them with larger breeds, which unfortunately were not so well adapted to the cold climate as were the Canadienne.

The breed began to fade into extinction when the Canadienne Cattle Breeders Association was formed in 1895 in a desperate attempt to preserve the breed. They were aided by the government of Quebec who considers Canadienne Cattle to be part of the region’s heritage.

The herd book, established in 1886, records 559 Canadienne Cattle and today there is barely 200, with very few in the United States. Canadienne Cattle are usually born a whitish color and acquire their color as they mature. It is important to preserve the gene pool, so be responsible when attempting to breed Canadiennes!