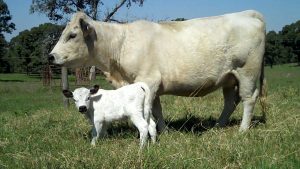 Very much a part of British heritage, British White Cattle may be seen all over that nation’s countryside today. These wonderful, dual-purpose livestock have excellent beef and milking qualities. British White Cattle are extremely docile. They are also polled, which makes them even easier to handle than horned cattle.

Being quite hardy, British White Cattle adapt well to harsh or extreme climates, and survive well even in unfavorable weather conditions. As the name so aptly implies, British White Cattle are white. They have black or sometimes red points at their feet, teats, eyelids, nose and muzzle – making them very attractive.

Mature British Cattle bulls weigh from 1800 to 2300 pounds, and heifers are generally about 500 pounds lighter. These cows have a symmetrical appearance, and the graceful line of the back is straight, sloping slightly to the base of the tail. They are massively built and of medium size, with medium length legs in proportion to the body. 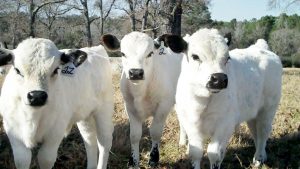 In British White Cattle bulls, the scrotum is extremely well shaped and quite large. In heifers, the udders are tight and well set, and the teats are quite small. British White Cattle are primarily raised for beef today, and the meat is well marbled although the cow does not have more than a quarter inch of backfat. Heifers have a sloping pelvic girdle and low-set pin bones, making them good calvers.

The wild, white Roman-descended cattle of the area were crossed with a polled bull from the more northern Cleveland area. In 1725, these first crossed cattle were sent to Gisburne and Somerford, from whence they continued to spread into East Anglia. The breed became centered in East Anglia, and the Woodbastwick herd, the oldest British White Cattle herd known, still resides there.

In 1860, a cattle plague nearly wiped out the northern branch of the British White breed, but from just two remaining cows the herd was rebuilt! In 1918, the breed standard of dark-pointed white cattle was established. The period between 1921 and 1926 saw British White Cattle and British White Park Cattle kept in the same herdbook, but a schism was effected. 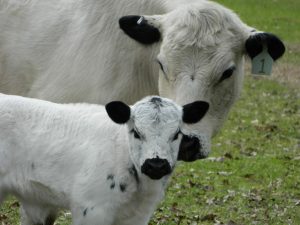 Until 1928, both horned and polled British White Cattle were accepted, but at this date, the standard began to require the polled type. Though British White Cattle had previously been exported to the Americas in very small numbers, when Great Britain was threatened in 1941, Winston Churchill sent a small herd to the United States.

Lately, a popular focus has been placed on their ability to produce lean meat. British White Cattle generally calve with ease and have good milk production. Typically, they have been crossed with other breeds to provide resistance to pneumonia. Calf mortality is not high and they have low maintenance requirements, being quite hardy.