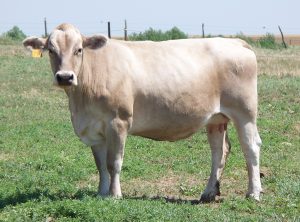 How now Brown Cow? Braunvieh, the German word for Brown Cow, is one of the oldest pure breeds in the world, and may well have inspired the old nursery rhyme! Braunvieh Cattle are extremely docile. They are a hardy mountain breed, and with their good feet and legs can forage in steep and rocky pastures. Today, however, Braunvieh Cattle are more often kept in intensive management systems.

They do very well in many types of farms or ranches and, with their sweet dispositions, are quite easy to handle. At maturity, a Braunvieh bull usually weighs between 2,100 and 2,500 pounds. Cows usually weigh between 1, 200 and 1,500 pounds. These cattle are the largest of the Swiss Alpine breeds. Their bodies are long and well muscled, and the legs and feet are athletic and well formed. True to their names, Braunvieh are brown in color!

They range from a light cardamom gray color to a darker chocolate shade. Often a light dorsal stripe accompanies a light colored muzzle, poll, underline, udder and inner thighs. Usually, the neck and shoulders, in contrast, are a darker shade than the rest of the Braunvieh’s body! In winter, Braunvieh Cattle grow longer, thick hair, although in the summer the coat remains sleek and short. The hooves are very hard and are dark in color. 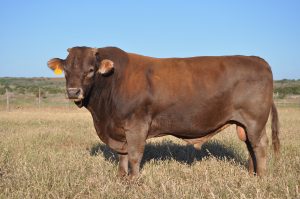 The black pigmented skin defines the color of the muzzle as black, as is the tail switch. Steers are usually slaughtered at 13 months of age, when they weigh 1,100 pounds. Their carcass yield is good. Usually, the Braunvieh is milked, and it produces about the same amount of milk as a Holstein-Friesian Cow would. Braunvieh Cattle are truly ancient.

By 1974, the Braunvieh comprised almost half of Switzerland’s cattle population! Braunvieh Cattle were imported to the United States in 1869 and 1880. They have spread through the Americas in use as beef cattle and cross breeders, as opposed to their dairy-use European counterparts who have been widely crossed with Brown Swiss Cattle. 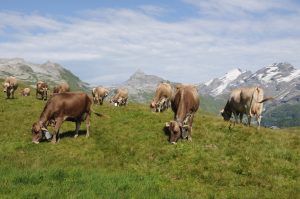 They do best if stabled in the coldest parts of the year. Braunvieh Cattle reach sexual maturity early and are very fertile. They have easy births and low rates of calf mortality. Braunvieh Cattle produce more than enough milk for their calves, which are hardy and grow extremely quickly!