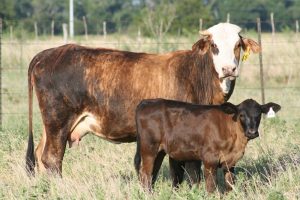 Specifically developed for high performance in hot, humid climates, Braford Cattle are extremely efficient beef and calf producers! Braford Cattle are so hardy it is almost hard to believe! They can tolerate extremes of heat and cold, and have good feet and legs, allowing them to walk long distances or be kept in rocky pastures.

Braford Cattle are not susceptible to eye or sun-caused problems, and are fairly disease and parasite resistant! They are a low-input beef breed, and do well even on poor ranges. Braford Cattle are also easy to handle, and can adapt well to most management systems. They also do well under drought conditions and will fend off most predators when left to the range!

At maturity, Braford Bulls are muscular but have medium sized frames. Cows are a little smaller. Although the hump is small or nonexistent, the navel flap is pronounced. Braford Cattle are mainly white with red markings. Occasionally, they have a white face like a Hereford, atop a red body. The coat is glossy and sleek. 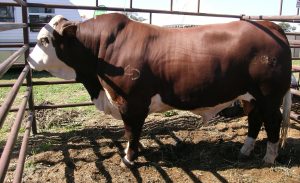 The eyes are hooded, and red eye patches characterize the Braford breed, preventing pinkeye, cancer eye and sunburn. The genetic makeup of a Braford is 5/8 Hereford and 3/8 Brahman. Braford Cattle have good rates of gain and are often used as veal calves. Carcass yields are good and the meat is of good quality.

The feedlot rate of conversion for Braford steers is about one kilogram per five point nine kilograms of feed. Developed by Alto Adams, Jr. in 1947, the Braford is native to Florida, USA. Originally, Adams had crossed Herefords and Brahmans, but discovered that Hereford crosses bred to Brahmans were producing much better calves.

After much experimentation, the Braford stabilized at 3/8 Brahman and 5/8 Hereford. Braford Cattle have also been developed in Australia and South Africa with the same genetic makeup, though with completely independent breeding experiments. Today, the Braford is extremely popular globally as a hardy, high performance beef breed. Braford Cattle are extremely easy to care for.

They can perform under drought, cold, heat, and poor grazing conditions and breed consistent and uniform offspring. Braford Cattle are resistant to parasites, blight, bloat, pink eye and cancer eye! This means they may graze in areas where other cattle cannot. 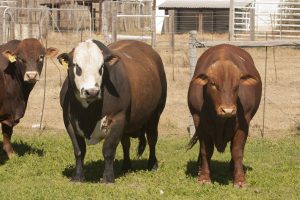 Braford Cattle are known for their reproductive abilities and will continue to produce healthy calves even under duress. In drought conditions, more than 90 percent of the cows will continue to birth healthy calves. They reach puberty early and bulls are aggressive breeders. Because Braford calves are born quite small, Braford bulls may be served to heifers or cows of other breeds to impart crossbred hardiness into other cattle herds.

Braford Cattle have good maternal instincts and make attentive, protective mothers. They have extremely good milk production abilities and easy calvings. After their 30-kilogram birth weight, the vigorous calves have rapid rates of gain and are weaned around seven months of age. Steers on the feedlot usually gain about 2.15 kilograms each day.