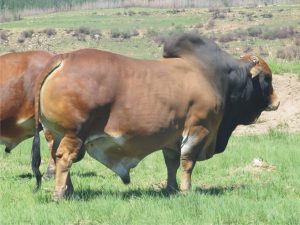 Rather than having a humped back like most zebu breeds, Boran Cattle actually carry their humps over their chests! Despite their slightly odd appearance, Boran Cattle are a good choice for beef ranchers seeking docility, production and hardiness.

Because Boran Cattle are naturally social animals, they are easy to keep in herds and are manageable and easy to drive from pasture to pasture. Polled Boran Cattle are even easier to handle! Resistant to insects, disease, heat and cold, Boran Cattle are very easy to maintain! At maturity, Boran bulls weigh between 550 and 675 kilograms and cows weigh about 440 kilograms.

Bulls stand 125 centimeters at the shoulder and cows are about five centimeters shorter. In color, Boran Cattle range from golden to black or patterned, although most are white or red. Usually, Borans have black points. Their ears are fairly small and semi-pendant, and they have horns, though some are polled. Boran Cattle have a thoracic hump that is much more pronounced in bulls than it is in cows. 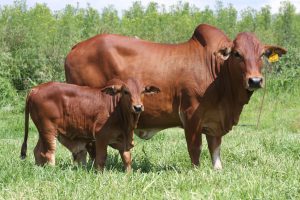 Their toplines are quite level and the hindquarters of Boran Cattle are well muscled. This breed has thick, loose skin and the hair is short. The navel flap, dewlap, and in males the foreskin, are hanging downward. Boran Cattle are used mainly for their good quality meat and are occasionally milked.

Like all Zebu breeds, they are highly valued for the hardiness they are able to impart as cross breeders into European cattle types. Boran Cattle are an improved tribal type! Local cows of the Somalian Boran people were crossed with beef cattle, most probably the Hereford. In the 1920’s and 1930’s, Boran Cattle spread from Somalia to the rest of Eastern Africa.

Recently, Boran Cattle have been crossed with Charolais Cattle and other Zebu types. In 1951, their breed society was developed in Kenya where they remain extremely popular as beef and crossbreeding cattle. Boran Cattle are quite easy to care for and easy to herd, even in bush land. They tolerate heat and drought very well and are manageable enough to be used for draft purposes! 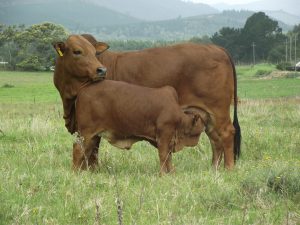 Boran Cattle are fairly insect resistant and will continue to grow quickly and to reproduce under conditions of duress! Boran Cattle have good maternal instincts and will defend their calves from predators! They are highly fertile and reach sexual maturity early. Boran cows have an average calving interval of 11 months, and calves usually weigh around 27 kilograms at birth.

Calvings are very easy because of the Boran’s pelvic conformation, and mothers produce plenty of milk for their vigorous calves. Usually, calves are weaned around eight and a half months. Their weaning weight varies depending on the area in which they were raised. On the feedlot, steers gain a little over a kilogram per day!