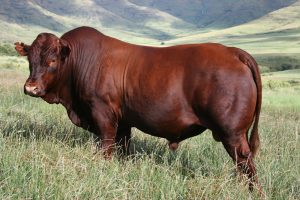 An exciting new breed of cattle, the Bonsmara breed, developed in South Africa, is a hardy, heat resistant beef producer who is definitely worth a second glance. Bonsmara cattle are generally even-tempered and easy to manage under most management systems. They do well in arid conditions and can also withstand humidity and insects.

With their great breeding abilities, general hardiness, and docility, the Bonsmara has become a favorite of many subtropical and global ranchers! Bonsmara cattle are a red, often dehorned breed. They have white underlines but should not have excessive white. The coats should be short and the animal should have a generally healthy appearance, with muscular, straight shoulders and legs and well-developed hindquarters.

Bonsmara Cattle have broad, straight faces that are of medium length. As medium framed cattle, bulls weigh around 500 kilograms at maturity, and cows are a bit lighter. Breed standards are very strict, and include reproductive as well as physical traits! Bonsmara were intended to be a beef producing breed who could compete with European beef cattle while withstanding subtropical conditions, and indeed they are!

Both heat and weather resistant, Bonsmara also tend to be insect-proof, resisting most tick-borne illnesses. They are well muscled and the meat is of high quality, marbled, and the carcass yield is high. Bonsmara Cattle are reproductively apt as well, and bulls have large scrotum circumferences. Cows have wide pelvic areas and nicely conformed udders. The formula for creating a Bonsmara cow was perfected in the 1930’s at South Africa’s Mara station. 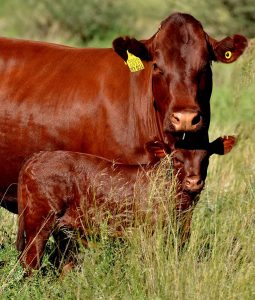 The plan was to create a breed that could compete with European beef cattle at the same time maintaining the ability to reproduce and survive well in subtropical climates. Today, the breed is stabilized at 3/16 Hereford, 3/16 Shorthorn, and 5/8 Afrikaner. Through strict selective breeding, these high quality animals have been the most popular beef breed in South Africa over the last quarter of a century. They derive their name from the station where they were developed, Mara, and the man who had an instrumental role in the development, Bonsma.

Bonsmara Cattle are spreading in popularity to the more arid regions of the world, the southwestern United States, for example. While there are not enough cattle in the U.S. at present to start a breeding trend, enthusiasts are hopeful that they have their foot in the door, and Bonsmara Cattle’s impressive performance will do the rest! From only 94 animals existing in the United States, the hopes for establishing a breeding herd are not high, but semen is constantly imported from South Africa along with embryos, and new calves are born every year! In show, breed standards for Bonsmara Cattle are very strict.

Cattle with bad or wild temperaments; skew faces or muzzles; under or over shot jaws; outward growing or inward curling hooves; scoliosis; congenital kinking of the upper third of the tail; long, fleshy sheaths or sheaths with openings that are too large; hypoplasia of the testes; cryptorchidism; torsion of the scrotum; or summer coats that are wooly or frizzy in texture and appearance would have to be taken into account first. A number of other faults will be marked as such but animals will not necessarily be disqualified for them. 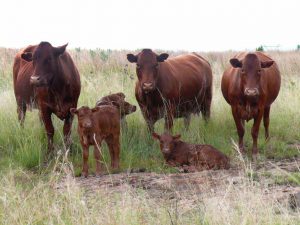 Generally at birth, Bonsmara Cattle weigh more than 45 kilograms, with female calves being a little lighter. They are weaned at about 205 days and generally have high weaning weights, 90 kilograms being average for a bull calf. Heifers generally have very easy calvings and calving intervals are always less than 26 months. They are good milk producers with nice udder conformations and in order to be considered for registration with the Bonsmara purebred society, must have a calf before the age of 39 months.

In crossbreeding, Bonsmara blood improves the weaning weights of the cattle they are crossed with in addition to imparting a general vigorousness. The calving percentage is high and Bonsmara Cattle are able to reproduce as normal under conditions of harsh heat.