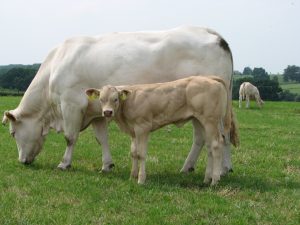 Generally, Blonde d’Aquitaine Cattle weigh 1700 to 2300 pounds, with females weighing about 600 pounds less! Bulls stand 150 centimeters at the withers and females about 142 centimeters. They are well muscled and smooth, with a light to medium frame and bone structure. The light colored, thick horns rise from a broad forehead, and darken at their tips. The muzzle is also broad on a triangular-shaped face, and the entire head is quite long. Blonde d’Aquitaine Cattle have, as the name implies, a “blonde” colored coat! The hair is quite short. 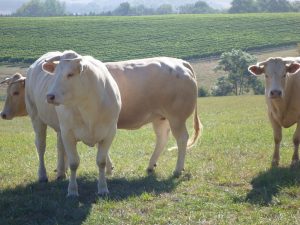 Originating in southwest France sometime during the Middle Ages, the breed was perfected in the 1800’s by crossing local blonde cattle with Blonde de Pyrenees, Quercy, and Garonnais Cattle. Shorthorn, Charolais, and Limousin Cattle were also crossed in much smaller numbers. First shown in 1845, at the Poissy Show, it has since boomed in popularity. In 1972, the first Blonde d’Aquitaine Cattle were imported to the United States. Today, Blonde d’Aquitaine Cattle are not only highly valued for their beef properties but also for their value in crossbreeding. They are able to produce calves in dairy cattle with higher proportions of saleable meat and thus more valuable! 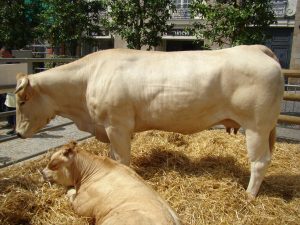