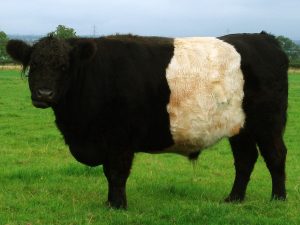 Hardy, beautiful Belted Galloway Cattle, or Belties, are a popular favorite of many breeders because of their high carcass yield and lean meat! Belted Galloway Cattle are quite docile and very hardy. Their thick coat allows them to survive in cold conditions and they can shed it in order to adapt to heat! They can forage even in areas with little rainfall and are quite low maintenance care-wise.

Belties are easily recognized by their double coats, which are “sheeted” or “belted” with white. The skin is thick and is covered by a soft, thick, warm undercoat. This in turn is covered by an outercoat of longer, wavy hair. Generally, the coat is black with a brownish tinge, red, or dun, and will be shed in hot climactic conditions and regrown in cold.

The belt is always white, though it may vary in width. Generally, it covers most of the Belted Galloway’s body, extending from the shoulders to the hooks. Often the udder is within the white coloration. Belties have a polled broad, flat head, especially bulls. The ears are medium length and point forward and up, and the long neck leads into the level-backed body. 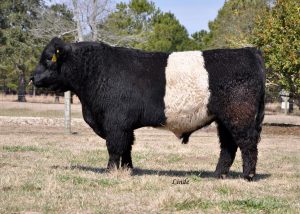 The body of the Belted Galloway is deep with a straight underline and long hindquarters. The fine-boned legs are of medium length. Mature Belted Galloway bulls generally weigh from 1800 to 2000 pounds, and heifers weigh 1100 to 1300 pounds. Their meat is lean and flavorful, because they have a thick coat and do not need excess fat to keep them warm, and they usually yield 60 percent. 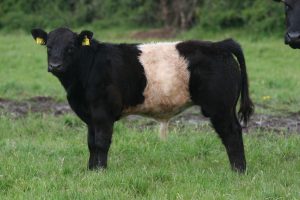 By 1878, they had their own herd book and in 1891, the Dun and Belted Galloway Association was founded. The Dun section was dropped in 1951 and only belted cattle could be registered. In 1950, Harry A. Prock imported Belted Galloway Cattle to the United States for the first time.

Today, Belties are quite popular, especially with small farms, and are valued as cross-breeders as well. Occasionally, solid black calves are born into herd of Belted Galloway Cattle, though the belted gene is dominant. Conversely belted cattle are occasionally born into herds of solid Galloway Cattle! At 14 to 18 months of age or seven to eight hundred pounds, Belted Galloway heifers are considered ready for breeding.

The calving interval is about a year and bull calves weigh 70 to 80 pounds, females weighing about ten pounds less. Beltie Cattle are easy calvers, good mothers, and produce lots of milk. They have a reputation for being long-producing and for birthing healthy calves consistently.