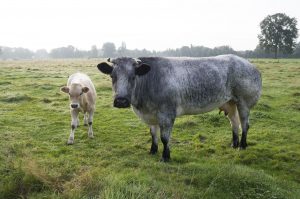 The Belgian Blue is also known as the Race de la Moyenne et Haute Belgique, Belgian Blue-White, Belgian White and Blue Pied, Belgian White Blue, Blue or Blue Belgian. They are docile animals highly valued by those individuals who desire a tender, low fat carcass. Although the Belgian Blue produces a very high quality carcass, they can be quite difficult to breed.

Belgian Blue’s often give birth by caesarian, however, the difficulty in breeding is made up for by the quality of the meat. They are quite low in fat and cholesterol and because they are highly muscled, the meat is very tender. The Belgian Blue was originally intended to be used both for meat and milk production. The goals of the breeders, however, changed to primarily meat. 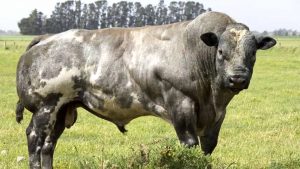 They came from the central and upper regions of the country and once made up over half of Belgium’s cattle population. The breed was created between 1850 and 1890, when native red and black-pied cattle were bred with Shorthorn cattle. The breeding policy, established in the early 1900s, was aimed at creating a dual-purpose breed, ideal for both meat and milk production. 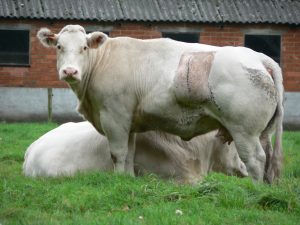 The Belgian Blue was introduced to the United States only in the middle of the 20th century. In the 1950s, American and Belgium breeders spent lots of time in heated debates over whether to continue breeding for both meat and milk production or to focus on the meat. The meat-lovers won, resulting in the heavily-muscles, healthy carcassed animal available today.