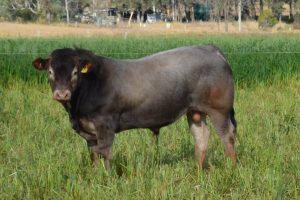 The Beefmaster is a docile breed that was bred throughout the 20th century primarily as a meat animal. They are quite popular in both the United States and South Africa. There are six points, created by the Beefmaster’s originator Tom Lasater that are used in determining whether a Beefmaster is a good specimen of the breed.

These points are the ability to breed quickly and naturally tend to their calf, having a good disposition, ability to maintain a good weight, conformation, being healthy and the cows being able to produce enough milk. In the initial breeding of the Beefmaster and today, these six points are the most important. A high quality Beefmaster must be capable of breeding every year and must produce enough milk to encourage heavy weanlings, regardless of the nutrition provided to the cow and calf. 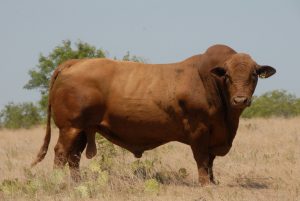 Beefmasters are generally quite docile. Most people believe that docile animals breed earlier and grow faster, and it is known that gentle animals are easier to handle. Most Beefmasters are very hardy and can thrive under a variety of climates and conditions.

Beefmasters are large animals. The bulls are generally quite muscular while the cows are more feminine. Although the calves are usually quite small, making for easier calving, they grow very quickly. Most Beefmasters are brownish-red in color, although all colors and combinations are possible. Breeding of the Beefmaster began in the early 1930s. Tom Lasaster was the founder of the breed. To produce the Beefmaster he combined Brahman (50%), Hereford (25%) and Shorthorn (25%) cattle.

Lasaster’s goal was to create a productive breed that would be lucrative during the economic crisis going on at the time. Lasaster bred his cows by the six points mentioned above. They were bred in South Texas and generally remained there until the early 1970s, when the breed underwent a massive expansion and growth in popularity. 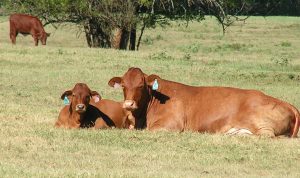 As their popularity grew, they were exported to other parts of the United States. Although the cattle market underwent quite a few falls, the Beefmaster has remained popular.

Between 1974, when the breed became nationally respected and 1998, the Beefmaster Breeders United has jumped from 300 to 7000 members. Because the climate in the United States is similar to that of South Africa, many South African farmers decided to raise Beefmaster cattle in South Africa. Today, there are 25000 breeding animals registered with the South African breeder’s association, the Beefmaster Cattle Breeders’ Society.

Beefmaster heifers give birth to small calves, making birthing easier, however, the cows grow very quickly. The female Beefmasters can breed every year and suckle the calf until it is time for it to be weaned.