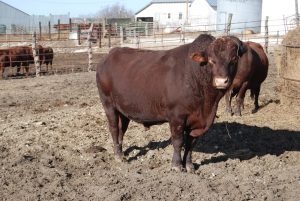 As a brand-new and little-known breed, Barzona Cattle are worth looking into! Hardy enough to survive in the Arizona desert, it may be safely said that these cattle can survive almost anywhere! Barzona Cattle are charming and quite social! They enjoy each other’s company, but will disperse over a field to graze it all equally.

In competition with other cattle, they will hustle grazing material to ensure that they get as much as they want! Barzona Cattle are docile and surprisingly easy to manage. They adapt well to different management systems and are extremely hardy in all climates. Though previously the carcass yield was not strikingly high, in recent years Barzona Cattle have been improved by ranchers and today the carcass yield is competitive in a tough market! 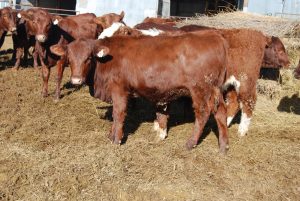 Barzona Cattle are available in both horned and polled varieties, and color may vary although most are very darkly pigmented red and some are black. The switch and underline occasionally exhibit white. Barzona are generally medium sized cattle, although the size will vary somewhat depending on which climate they are kept in! The heads are long and these cattle have a natural resistance to pink eye and cancer eye in addition to foot rot.

The feet and legs are very strong and Barzona cattle can easily move in rough or rocky terrain. They can graze even sparse ranges and survive vigorously. Barzona cows carry their tight milkbags close up to their bodies, and have minimum udder problems. In 1942, F.N. Bard wanted to develop an entirely new breed of cattle suited to the harsh climes of Arizona. 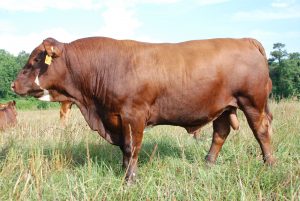 His main goal was profit, and he hired a geneticist in 1946, E.S. Humphrey, to help him. They began by breeding Africander bulls to Hereford cows, and later mixed in Shorthorn and Angus characteristics. The selective emphasis was based solely on the cow’s performance, rather than the bull’s.

Thus Barzona Cattle were developed and in 1968, were recognized as an established breed. The Barzona Breeder’s Association of America was formed in the same year. Barzona Cattle operations, which had previously been family oriented, were decentralized in 1974. Today breeding is centered in Oklahoma and various southwestern United States areas.

Though mildly resistant to internal and external parasites, Barzona Cattle remain minimally susceptible to these pests. Barzona Cattle are good breeders, with the bulls being fairly aggressive in pursuit of the cows and the cows being very good mothers. Calving is also generally easy and from birth, the calves are extremely hardy and vigorous. They weigh less than 70 pounds and are disease resistant. Cows can breed from the time they are yearlings and with good management, the calving interval is usually about a year.