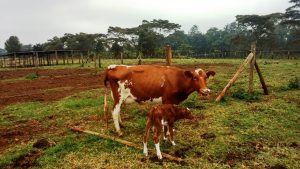 Much improved over the last few centuries, Ayreshire Cattle today are extremely hardy dairy cows, which exhibit strikingly patterned coats! Because of their hardy dispositions, it seems Ayreshire Cattle can survive nearly anything!

Unlike most dairy cows, they do not need expensive or abundant food ready, as they are talented grazers and can eke out an existent from the harshest moorland! They can survive in harsh climates and adverse weather does not seem to faze them much! Ayreshire Cattle do have a bad reputation, however, for kicking or for being generally high-strung and temperamental, but enthusiasts claim that if raised properly this problem may be avoided. It seems the trick is to treat Ayreshire Cattle as though they are horses, using persuasive methods rather than pushing them around! Apart from being great milk producers, Ayreshire Cattle may also be used as beef cows. 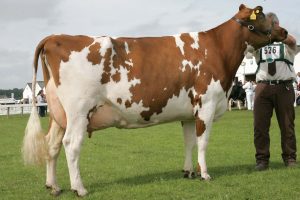 Ayreshire Cattle were once characterized by their foot-long, graceful, upward-curving horns, but today most are dehorned as calves as the horns may be more damaging than useful. Ayreshire Cattle stand 140 centimeters at the withers, with females being about ten centimeters shorter.

They reach 1200 pounds when fully mature, and the coat is of a red and white colored pattern. Generally, the color pattern is distinctly separated between color, though there are speckled Ayreshires and very rarely roan or brindle color patterns are seen. Averaging 20,000 pounds of milk per year, Ayreshire Cows also have a moderate butterfat yield. It is said that because of its composition, Ayreshire Cattle produce milk that is extremely healthful for babies and young children.

As the name would imply, Ayreshire Cattle are native to Scotland’s County Ayr. They were developed from an unknown cross prior to 1800, when many of them were black. Around 1775, various colorations began to be more common. Native cattle were crossed with any breed which Scottish farmers thought would improve the stock, including the Teeswater Cattle, which also formed the Holstein and Shorthorn breeds, and Channel Island bred Cattle. At various times, the Ayreshire was called the Dunlop or the Cunningham Cow! The herd book was established in 1877. Ayreshire Cattle also gained popularity in the harsh New England region of the United States, where Henry Hills introduced them in 1822. 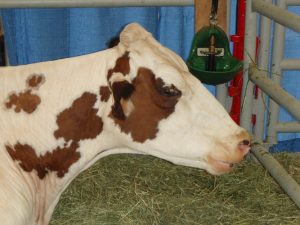 They quickly gained popularity and as a publicity stunt, two Ayreshire Cattle were walked from their home in Vermont all the way to the National Dairy Show in Missouri in 1929! Promotional campaigns for Ayreshire milk began, and the breed quickly became extremely popular, known for its good form, hardiness, and quality milk!

Apart from their hardiness, Ayreshire Cattle generally have great udder conformation, and are not susceptible to foot and leg problems. They are extremely intelligent and adapt very well to different dairy routines or management settings. Ayreshire Cattle are reputed to produce calves which are extremely hardy and which have low yellow tallow content, which means they may be raised as steers. Today, Ayreshire Cattle continue to improve and it is recommended that breeders use all the technology available to them, i.e. artificial insemination, DHI or DHIR testing, and type traits appraisal.