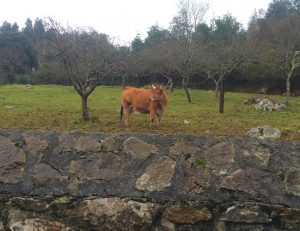 At maturity, Asturian Mountain bulls stand around 134 centimeters, and cows are around 120 centimeters. Bulls generally weigh around 750 kilograms and cows follow, at around 450 kilograms. Asturian Mountain Cattle are characterized by brown or cream coats. There is generally a light band around the eyes and muzzle, and the underside and innersides of the legs, including the perineum and udder, are usually very light. Eyelids, lashes and mucous membranes are generally black in Asturian Mountain Cattle, and bulls have black muzzles, horn buds and eye circles, tail switches and scrotum circles. 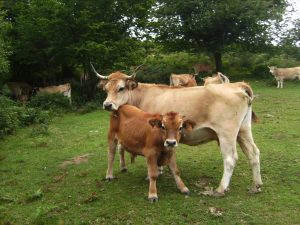