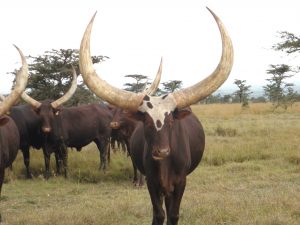 Ankole Cattle is an important part of daily life in rural Africa. There are four varieties of Ankole Cattle known, the Bahima, Bashi, Kigezi and Watusi varieties. The cattle are very important in their native Africa, but are rarely kept elsewhere. A hardy breed, the Ankole is capable of living in very harsh climates characterized by little water and grazing land.

They are very active, energetic animals. Some members of the species are quite aggressive and are known to charge strangers with little or no provocation. Dominant animals within the herd will also charge other cows, although they will more often just push the subordinate animals out of the way with their horns. In a large herd, many smaller animals will exhibit scars on their hindquarters from the horns of the dominant beasts.

The most impressive feature of all the varieties of Ankole cattle is their extremely long horns. Many people wonder why the horns are so large, why it was necessary to breed the animals specifically for this trait. Regardless of the use of the horns, the horns themselves are quite elegant. They are hollow and are therefore much lighter than one would expect. Other animals, such as deer and elk, have solid horns that are quite heavy. An old African breed, the Ankole exhibits many characteristics of “Zebu” animals.

These include the hump on the back and the hindquarters, which slope. The hump is very small, however, and often cannot be seen at all on cows. The Ankole’s short neck is topped with a moderately long head. Their small udders do not produce much milk. The coat of the Ankole is generally red, although black, fawn or pied animals appear as well. 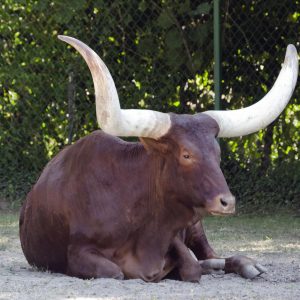 Found between Lake Mobutu and Lake Tanganyika in eastern Africa, the Ankole is thought to have been developed from animals brought to Uganda between the 13th and 15th centuries. It is believed that the original breeders of Ankole were the Hamitic tribes. Although the Ankole can survive in very harsh conditions, they were susceptible to the tsetse fly, likely the reason the tribes brought their animals south. In all the tribes, including the Hima tribes in Uganda, Kenya, Tanzani, and the Watusi tribe in Rwanda and Burundi, breed their cattle based on the size of their horns.

Ankole cattle are never used for meat, although most tribes make a daily ritual of ridding the animals of their small amounts of milk. Instead of being used for meat, they are considered signs of high status and are used for ceremonial and ritual purposes. The first Ankoles in Britain were kept at Whipsnade Zoo in London. These animals were imported in the early 1970s.