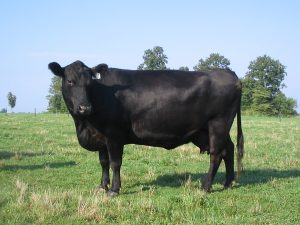 The Angus cow, sometimes known as the Aberdeen-Angus, is a large breed of cattle native to Scotland. They are quite large yet docile. The Angus Cow is known for its ability to live in almost any type of weather. In its native climate, gulf streams warm the winters and the summers are cooler than in many other parts of the world. They are very adaptable animals and can survive in almost any climate. The docile Angus is very friendly and obedient. It generally demands little of its owner that its owner does not demand of him.

The Angus Cattle is well known for its high quality carcass. Angus cows are often crossbred with other types of cattle to improve the carcass quality of the other breed. The female Angus cattle rarely have difficulty calving. The young calves grow very quickly and are reared primarily by their mothers. Angus cattle feed primarily on the grasses that grow in their native Scotland. The large amount of rainfall is well distributed, causing pastures to thrive. 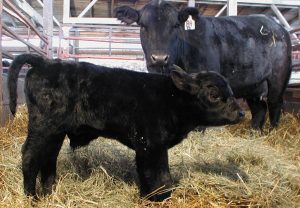 The very large Angus cattle are almost entirely black, except when the udder has white markings. They are naturally polled, or hornless, a fact which caused some murmuring when Angus cattle were introduced to the international market.

Angus cattle likely date back to prehistoric times. There are pictorial representations of polled cattle in caves, drawings that date back to before recorded history. Similar breeds were known in Siberia and Egypt, but most historians believe that the Aberdeen-Angus breed is indigenous to Scotland. It is believed that in the late 1700s Scottish farmers worked to improve the native Scottish breeds, removing the varying colors common among the cattle and creating a uniformly polled breed.

The breed that is today known as the Angus most likely was derived from two breeds, the Angus doddies and the Buchan humlies. Both “doddie” and “humlie” are old terms that refer to polled animals. These early cattle were primarily used as work animals. Beginning in the early 1800s, the Angus cattle were valued for their high quality carcasses.

The ideal polled cattle were those of Robert Walker from Wester Fintrav and Mr. Williamson from St. John’s Wells. The animals belonging to William Fullerton, Lord Suthesk, Alexander and Lord Panmure, all from Angus County, were also important in the production of the breed. Hugh Watson and his family, which started breeding the cattle in 1735, are considered the most important breeders of Angus cattle.

Angus cattle were first brought to America in 1873. George Grant imported these animals to Kansas. The first breeder’s association in America, the American Aberdeen-Angus Breeder’s Association, was found in 1883. The name was shortened in the 1950s to the American Angus Association. As the popularity of the breed grew, so did the breeder’s association. Angus cows are capable of breeding in even poor conditions. They generally calve once a year. The gestation period is 9 months and it usually takes 3 months to breed back. The calves are weaned at around 205 days.