Did you know that the Amritmahal breed of cattle, also known as the Amrit Mahal, was actually developed for military purposes? Incredible perhaps, but true! Today, Amrit Mahal Cattle are used for entirely different programs, such as milk production!

Although Amrit Mahal Cattle are widely used for draft purposes, they require care and patient attention in order to be easy to handle, or at least manageable! They are known for their wild, often defensive dispositions when left out to pasture without human contact. In fact, Amrit Mahal Cattle have been known to attack strangers! If handled regularly and kindly, however, these unruly cattle can be hand raised into fine draft animals. They are intelligent and highly trainable, though impatient.

Generally, Amrit Mahal Cattle have short, glossy gray hair, although the shade varies from a silvery white to a darker, gray-black color. Often lighter gray markings are visible over the head and dewlap. Although aging animals are lighter in color, generally Amrit Mahal Cattle have a black muzzle, black hooves, and a black tailswitch! The skin is also pigmented black. Their heads are triangular and long, with a slightly domed forehead. The horns grow up and back, and usually have black tips. Occasionally, older cattle have such long horns that the sharp tips criss-cross! 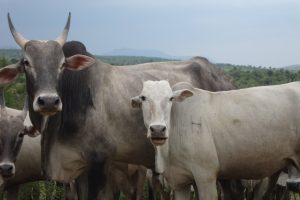 The eyes of Amrit Mahal Cattle have a bloodshot appearance, and their small, level ears are yellow inside! The dewlap, navel flap, and sheath are all very small and are not loose. In fact, the entire body has a powerful, tight, compact appearance. Amrit Mahal Cattle have a pronounced hump, which may grow up to eight inches in bulls! The legs of Amrit Mahal Cattle are of moderate length, and the hooves are small and very hard. Amrit Mahal, although poor milkers by Western standards, were once used primarily as milk cows! They have also been used as draft animals that are very powerful and speedy, and it is in this capacity that they are most widely used today.

Amrit Mahal have their origins in India, where they were bred in Mysore to supply the palace and royal family with its own private dairy! The bulls were used in the military and were divided into various jobs. For example, there were pack bullocks as differentiated from gun bullocks! They were renowned for their speed and power, and could accompany troops marching 100 miles in just two and a half days! In 1860, the Amritmahal breeding establishment was liquidated for economic reasons, and the Amrit Mahal, previously kept in three strains, was conglomerated. 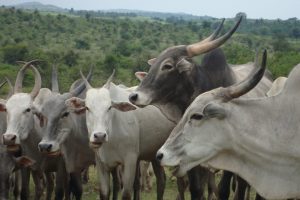 That meant that the Hallikar, Hagalvadi, and Chitaldroog varieties of Amrit Mahal merged. In 1866, the need for an established herd again arose, and it was primarily the Hallikar strain that provided a basis for the new Amrit Mahal Cattle. Today, Amrit Mahal remain economically important, doing much of India’s draft work and fast transportation work. The pure types are maintained on state farms known as Amrithmahal Kavals, and there are about 1,200 cattle in these herds. Amrit Mahal must be raised closely with humans from birth and need special attention and patience, lest they become vicious and unruly. Although they were once used for milk, today they are considered to be very poor milkers and the breed is in a state of general decline.