The Africander breed is also known as the “Afrikaner”. It is the most popular breed in South Africa. Part of their popularity may be do to the fact that they are very harty. The Africander can do quite well in very poor conditions.

Because Africanders are native to an area with very hot weather, they can thrive in the hottest condition. They do well in both tropical and sub-tropical regions. Africanders are calm animals with a gentle temperament. It is a very virile breed. Africanders can resist ticks with ease. Primarily used for meat, the Africander breed is known for its lean meat. The Africander breed uses feed very efficiently: 100 Africander cows and their calves can prosper on the same land that would feed only 80 cows of a similarly sized breed.

A moderately sized animal, the Africander’s docile temperament makes it an easy beast to handle. The humps that the male cattle have are typical of indicus breeds. The Africander’s coat, which ranges from deep red to light tan, covers a very loose skin. Their heads are accented with white horns and ears that hang next to the head rather than standing erect. 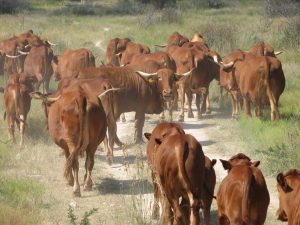 The Africander breed is native to South Africa. It is one of the Sanga type breeds of cattle, which were kept by the Dutch when they colonized Cape Colony in 1652. They captured the animals and domesticated them to use to pull farming equipment. Africander cattle were most likely the animals that pulled the wagons on the Great Trek, between 1835 and 1836, from the Cape of Good Hope to Orange Free State, the Transvaal and Natal.

The trek (which comes from an Afrikaans word meaning “draft”) occurred because the Dutch people were trying to escape British rule. Today, the Africander cattle are the most popular cattle in South Africa. Their primary use has shifted from draft work to meat production.

Africander cattle kept in Australia may be susceptible to tick fevers, including Bovine babesiosis and Anaplasmosis. However, Africanders have a natural resistance to ticks. Although Africanders are sometimes slow in maturing, once they are sexually mature they are usually quite fertile. They are quite capable of breeding in even the toughest conditions.